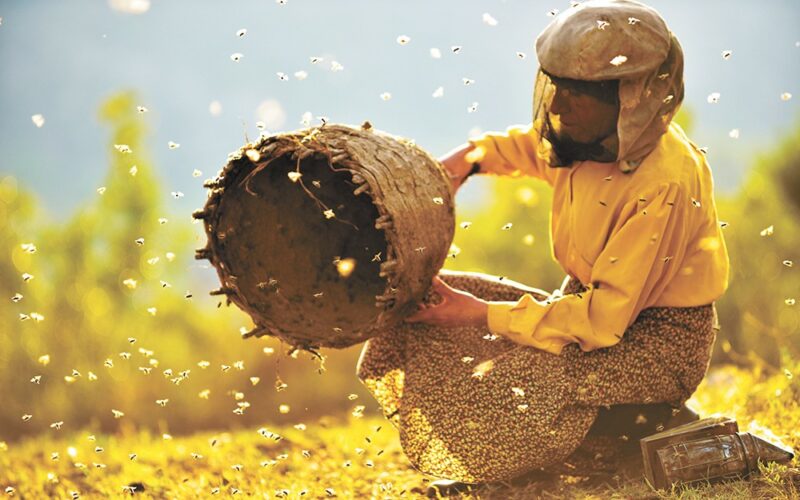 Are you ready to embark on a real-life mythical journey that reveals vital messages of wisdom?

If so, take time to watch Honeyland, nominated for Best Documentary Feature and Best Foreign Film in the 2020 Academy Awards.

The film, by Macedonian filmmakers Tamara Kotevska and Ljubomir Stefanov, begins with giddying shots of a precarious high mountain ledge as a middle aged woman tends a beehive hidden in the rocks. Set to a haunting score and audio soundtrack by Macedonian group, Foltin, the astonishing cinematography catapults us into an unfamiliar universe –the rare and mysterious world of a remote Macedonian village and the life of the colorful, resourceful, wise and expressive main character, Hatidze Muratova, who follows ancient beekeeping traditions.

At first, we are lulled into Hatidze’s domain. Alone in the village, she tends her bees, quietly singing and talking to them, like old friends. Similarly, she cares for her only human companion, her elderly and sick mother, with patience and love. Hatidze’s wisdom comes from experience and mutual respect for the bees– she never takes all the honey – always leaving half for the bees. As a result, she always has enough to sell and for herself and never gets stung.

Suddenly an itinerant Turkish family shows up with noisy fanfare, a presage of trouble to come. With seven unruly kids, and a herd of equally disobedient cattle, Hussein and Ljutvie Sam seem always to be teetering on the edge of survival. The kind Hatidze offers to teach them sustainable beekeeping, but Hussein, under pressure to increase his honey production from his greedy buyer, over-harvests the honey, causing mayhem when his starving colonies kill off Hatidze’s bees.

This purely observational film unfolds slowly, but the viewer is rewarded with an impactful story and authentic characters. The personal and the universal are deliberately and skillfully interwoven. The mundane is always flecked with the transcendent. An impatient boy roughly delivers a baby calf, the family recedes into the distance as they leave for the season, Hatidze nourishes her mother with honey and bananas. Every memorable scene takes on larger meaning in this beautiful film.

The seemingly petty struggle between the beekeepers becomes a poignant real-life parable about keeping life and nature in balance. At times, we forget this is a documentary, not fiction, due to the expert craft of the filmmakers who deftly build a tale that takes on themes of universal magnitude. The film shows, but doesn’t tell, how we are all interconnected, and how human behavior can affect each of us, and our natural world, in catastrophic ways.

In the end, it is the close-up of the single bee, being saved from certain death by Hatidze as she gently plucks him out of the water with a leaf, that becomes emblematic of the fragility of nature, and our role in saving it. Lest we despair, there is nevertheless a glimmer of hope as the film comes full circle and Hatidze returns to the very ledge we see at the beginning of the film. As she gently removes a slab of honeycomb from inside the rock, we are reminded of the possibility that, with a conscious effort, new life can always be resurrected.

In Turkish, Bosnian and Macedonian with subtitles. 87 minutes. Currently available on Hulu, On Demand via You Tube, Prime Video, Google Play, Vudu)