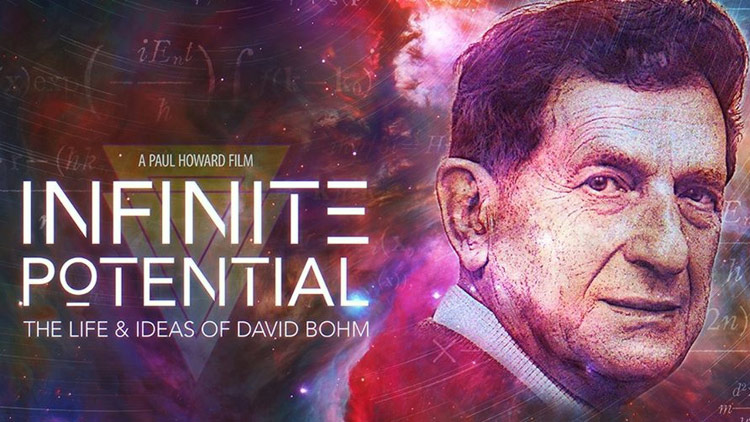 I discovered David Bohm in a Medieval village in Tuscany, Italy around 2005. Prior to that I knew nothing of him.

Having just completed INFINITE POTENTIAL – The Life and Ideas of David Bohm about his groundbreaking work in physics and the deep spiritual implications therein, the question for me was: how come I had never heard about this extraordinary man and his work? After all he was the one that Einstein nominated as his “spiritual successor” and his Holiness the Dalai Lama called his “Science Guru”.

The Film I made is an attempt to answer that question, to shine a light into the world of Bohm and how making the film changed my life.

I was alone in that small café bar In Tuscany, when an elderly gentleman with a strong liverpudlian accent appeared beside me and ordered an espresso. We chatted together for a while. His name was David Peat, a physicist who was a colleague and friend of Bohm’s.

In that brief synopsis, I read about Wholeness; the Implicate order; the Quantum Potential and Non-Locality. I was immediately drawn to the philosophical aspects. The idea that our apparent everyday world of space time emerges from a deeper “dimension” of reality resonated deeply within me. Here was a clear explanation of the mystery behind our perception of actuality. It confirmed for me what I had intuitively always sensed and now believe. That we are made manifest through the infinite organizing power of quantum phenomena, all in conformance to an information potential that allows our physical Universe to be.

Once grasped, I was able to comprehend that behind the duality of our everyday world, is a deeper dimension where everything is interconnected, a full expression of WHOLENESS. I came to KNOW that the OBSERVER is the OBSERVED. I sensed the realm of BEING, which is fully consistent with quantum theory. I began to believe that we are all ONE CONSCIOUSNESS and that the Ultimate Reality is that Consciousness, the immeasurable, the “Spirit” that Bohm says “is never born and never dies”…

and the most profound realization of all…
there is No dying, No death.

Bohm merges INTO his Physics, profound ideas which have been known for millennia by the mystical traditions of the east; that every particle in our physical universe is informed of its condition and context, giving rise to an unbroken WHOLENESS in the cosmos, a profound interconnectedness throughout the entire physical Universe.

Knowing this, I now know for sure that we need to take better care of ourselves, one another and the household we all share – planet Earth! We are bound by an inescapable network of mutuality. Whatever affects one directly, affects all indirectly. The realization that we are all connected should inform our moral intentionality and actions. If I injure another, I injure myself. We can effect positive outcomes through our positive participation within the Whole…

As Bohm states “Not only do we transform as eternity unfolds in us, but also eternity may transform, as it returns to itself in a richer way, through our participation. We may participate in the whole and thus help to give it meaning…we are an intrinsic feature of the universe which would be incomplete without us in some fundamental sense”…

That was David Peat’s gift to me when we met in that Café Bar in Italy. He introduced me to the life and ideas of David Bohm – the Visionary Scientist and Spiritual Man.

Paul Howard
The Producer and Director of
Infinite Potential:  The Life and Ideas of David Bohm

For the month of February, all of our Nirvana $299/year members can watch INFINITE POTENTIAL: THE DIRECTOR’S CUT on CGOOD TV. Want to learn more about our subscriptions?  Please click here.

Paul Howard
Paul Howard is a Film/Television Producer/Director. Born in Ireland, Paul has 30 years experience in production, mostly in Ireland and also Australia. Paul is currently finalising production on a Feature Film titled “TWICE UPON A TIME IN DUBLIN” and in development on a number of international documentary/ drama co-productions including “INFINITE POTENTIAL – THE LIFE AND IDEAS OF DAVID BOHM”. Recent productions include 21st CENTURY RAILWAYS; MARSH TO THE SKIES; SECRET SITES OF IRELAND; BLOOMSDAY; THE IRISH IN HOLLYWOOD. Paul has produced, directed and edited multi critically acclaimed documentaries and series for RTE (Ireland), Channel 4 (UK), Nine Network (Australia), Nomad Films International (Australia), Imagine Limited (Ireland), which covered most genres including biography, natural history, wildlife, nutrition, lifestyle and current affairs.